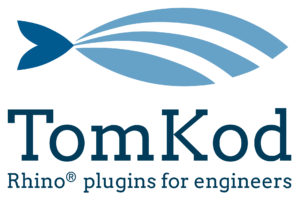 Rhino Beam Tools is a rhino plugin built as a bridge between Rhino and specialized beam calculation softwares.

‘Rhino Beam Tools’ is a rhino plugin built as a bridge between Rhino and specialized beam calculation software.

Our plugin helps you to draw your beams, set constraints to the nodes, and export the whole thing to the external software.

At the moment, supported software are:

The free evaluation can be used once per computer and requires network access to software-license.ship-st.com

The toolbars for Rhino are always included in your plugins installation directory, or can be downloaded here.
To install them, you just have to drag/drop the file “Tomkod.rui” to a rhino window.

v1.4.1 (03 May 2021)
Fixed: Yak package will be built with a “win” argument
Fixed: ‘PlugInDescription’ tags in AssemblyInfo
Changed: [TomKodCommons] Code restructured to use TomKodCommons API (v1.0.1) instead of files shared between projects
Fixed: Crash due to thread access with delay timer
Fixed: Yak package’s plugin description

v1.4.0 (22 Apr 2021)
Fixed: “RBT_Common” and “Common” modules reorganized (Internal)
Added: [RBT Panel] Possibility to add a negative angle to a beam (The positive equivalent angle will be stored)
Fixed: [RBT Panel] A scrollbar should be added when the panel size is too small
Fixed: [RBT Panel] Text Height and Offset values did not validate until another field was selected (Changed to real-time update)
Fixed: [RBT Panel] TextHeight field should range from 2.6 to 30
Fixed: [RBT Panel] Color pickers texts
Fixed: [RBT Panel] [RH7] Colors buttons didn’t work properly on the settings’ tab because of RH7’s handling of the color’s alpha channel
Fixed: [RBT_ImportLines] Straight portions of polylines were split while they remained properly unsplit for polycurves
Fixed: [RBT Panel] The “Reverse Beams” button only reversed one beam in case of multiple selections, contrarily to the command
Changed:[RBT Panel] “LabelAngle” control removed (not needed anymore) – Custom NumericUpDown will be used instead.
Added: Rhino Undo feature for ReverseBeams() & CreateRBTLayers() functions
Fixed: [RBT Panel] When selecting a beam with an angle set, then two others: the first selected did get the last selected angle value
Fixed: [RBT Panel] When selecting a beam with no angle, then another one, then one with an angle, then another without:
all of them did get the third’s angle value.
Fixed: [RBT Panel] When a beam was deselected, the “Various” value was not refreshed
Fixed: RBT’s beam orientation rules did not always match Steel’s, because GetLocalOrientedPlan() was
based on Rhino’s default normal plane for lines.
The new internal functions GetLocalVectorX(), GetLocalVectorY() & GetLocalVectorZ() will follow exactly Steel’s spec
Fixed: Add a 300ms delay to UpdatePanelFrom() to avoid repetitive loops on multi-selection (A lot faster)
Fixed: [RBT Panel] Selected Nodes/Beams labels replaced by read-only textboxes for a better display when many items are selected
Added: [RBT Panel] Tooltips
Fixed: [RBT Panel] Rhino’s undo feature enabled when editing the beams’ and nodes’ properties
Updated:[User doc] Beam’s local axes definitions detailed in userdoc
Fixed: [RBT_Export] Beam orientation angles were lost when exporting to steel 4 (Vector was unitized then rounded to 1)
Fixed: [RBT_Export] RDM7 don’t use the same local axes: the beam’s axe Z should be Steel’s local axe Y
Changed:[TomKod] Internal module “RhinoFunctions” reorganized
Fixed: [TomKod] Help button text updated on activation form to target TomKod Server URL dynamically
Added: [TomKod] Tooltips in license activation form
Added: [RBT_Export] Nodes constraints for RDM7 export (Limited to RDM6-7 capabilities / See UserDoc)

V1.0.1.0
Fixed: Bug where the plugin created RBT layers on every rhino models
Fixed: “RBT_About” command
Improved: RhinoBeam panel will stretch according to its display size